Blockchain goes hand in hand with Bitcoin in many people's minds. However, it's a powerful invention in it's own right and the uses for blockchain are quickly compounding.

If it's not simply a cryptocurrency, what is blockchain? And how can you use it for other purposes?

When you purchase something online, the transaction is processed through and verified by a bank. The bank acts as a central third party that watches over interactions between entities to ensure everything is legitimate. 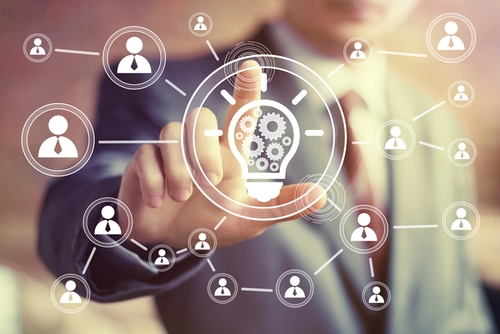 In the past, digital purchases have required a third party to verify the transaction.

Visualise every entity as being a separate node. A ledger takes note of all transactions that are happening. However, this ledger isn't anchored to one place, like a bank. Instead it's duplicated thousands of times, spread across a public or private network of nodes, and is constantly updated and reconciled to reflect new transactions. It's similar to an online spreadsheet that multiple people have access to and can modify all at once.

Blockchain records are public and verifiable. As there is no master copy of the ledger to override other versions, there's no central location available to alter, which makes the technology virtually impossible to corrupt. While blockchain itself is safe however, endpoint security is still an issue that needs to be considered.

Where is blockchain useful?

The decentralisation of blockchain is the reasons cryptocurrencies have thrived. People are able to verify information and transactions without the need of a third party, such as a bank.

This is only one specific use of blockchain. Others include:

The last use is where a ledger contains a set of conditions written into it. If these pre-written requirements are triggered, then an automatic and self-executed action occurs. This is useful in areas such as insurance payouts, as it can streamline and automate the process while preventing corruption.

Blockchain is a relatively new innovation which is still maturing. It brings many potential benefits that are already being implemented in areas such as cybersecurity, healthcare, government, and manufacturing. However, there are some major roadblocks that need to be dealt with too. For example, depending on how the blockchain is designed it can require a lot of processing power. It also needs assets to be digitised in some way in order to add it to the ledger.

If you'd like to learn more about blockchain and the potential applications it can have within your digital transformation, contact the team at FinXL today.

FinXL / XLdigital / Southern Cross Computing is open for business. We are delighted to confirm that all offices around Australia have now reopened and we are back in the office.

To keep our employees safe, we have taken the necessary steps and measures to ensure all of our offices are compliant with good hygiene and social distancing requirements.

Please contact us by telephone or email in the first instance.

Thank you for your understanding and cooperation.

The health and safety of our workers and clients are our number one priority.

We are closely monitoring Government advice to stay across the latest updates and implement appropriate measures based on these.

Current Government guidance can be found at: